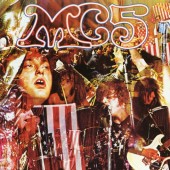 If your eyes are scanning this words right now, you must have a spark of interest for a time long vanished. The cultural circumstances surrounding the creation of this music will never occur. This shining disc that you now possess has, encoded in its whirling vortex, a moment of history frozen forever. This is a window through time and you can unlock the fabled Grande Ballroom gates. Uncle Russ will take your ticket. Now step trough the kaleidoscope into a magic night in Motor City Rock an Roll.

Gaze deeply into the prismatic colors of this compact disc like a crystal ball and let the vision envelope your senses in mystic sound. Let yourself step back to a time when muscle cars ruled the Detroit streets and Motown battled psychedelia for the airwaves. It was a time when everything was everything. A time of girls without bras and sex without rules. Bands from all over the word came to Detroit to play in the arena of the Grande. Close your eyes and you shall hear earth-shattering sound waves and see panoramic light beams. Can you smell the fragrance of patchouli incense and strawberry cigarette paper?

This music is old enough to buy beer in any state in the Union, so why is it important that it’s been re-released by Elektra today ?

Because this album of songs is a microcosm of the times that spawned it. It was an idealistic attempt to make something more significant than the mere product that dominated the charts. This record has within it the vision and the violence of a turbulent time in America. This music expresses the frustration and future shock of the soul of the sixties. This is a portrayal of the struggle to create a word that was destined never to be. An impossible beautiful dream that was doomed by the nation’s descent into the disco inferno of the seventies.

We were Punk, before Punk. We were New Wave before New Wave. We were Metal before Metal. We were even “M.C.” before Hammer. Depending on your perspective, we were the electro-mechanical climax of the age, or some sort of a cruel counter-culture hoax. We were considered killer, righteous, high energy dudes who could pitch a wang dang doodle all night long. People concluded that we were:

• No exalted talent. •The revolution hype. • John Sinclair primary political tool. • Like 133 years olds on a meth power trip. • Insolent to our British betters, and • Definitely born under a bad sign.

Some saw us as valiant rebels, cheerfully thumbing our noses at parental authority. Otherd saw us as symptom of a sick society. We were hassled by the pigs and pushed around by both the media and the revolution. But the bullets bounced right off, and through sheer determination, we survived more death blows than any other Band in history.

Return with me now to Halloween night, 1968. It is the New Year of the revolutionary Zenta calendar. Producer Jac Hotzman and Engineer Bruce Botnick are ready at the recording console. John Sinclair and Danny Fields prepare for the musical onslaught. The prophet of Zenta, Brother J.C. Crawford readies himself to make the opening and invocation. Wayne Kramer and Fred Smith tune their atom smasher guitars, resplendent in sequins and spangles. Drummer Dennis Thompson and Bassist Mike Davis prepare themselves for the manic exertions to come. I can feel the anticipatory excitement building within me as I listen to the mounting sound of the waiting crowd… The moment approaches. This is the night we’ve been working for all our lives, when the MC5 will unleash sonic fury and devastated the cosmos with mega-burst of thunder.

Come dance beside me in the snake pit of wires on the Grande’s stage while the cataclysm explodes like a missile strike all around us. Watch the light show roll and flare, swirling all over the walls and ceiling flashing of mirror ball in a billion shards of glare. Feel the excitement of the crowd as they let the sound wash them like a gigantic tidal wave, wiping out the last shreds of a civilization and leaving them in a state of sweaty, primal oneness. See Grande girls with day-glo face paint swirl under the black light, phosphorescing in the music’s roar. Watch get-down Detroit dudes and their mini-skirted foxes to the tribal stomp, twirling as if it’s the last night of the Universe.

We rode the roads together and it was a brutally hard slog. We fought the fights and suffered the slings and arrows and still won our share of victories in the great battles of the bands.

A lot of things have changed since the recording of this album. Some things are changed forever. But if we could speak to you now, from the unity we once knew, I think we’d say…

From the deep past We salute you!

Thunder in the night forever!”