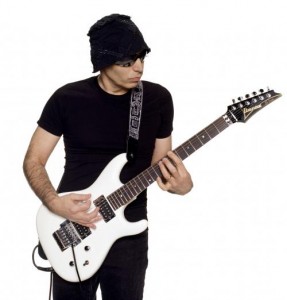 Joe Satriani didn’t arrive on the guitar scene; he blasted in-just like the Silver Surfer, the comic book anti-hero who soared across the cover of Satriani’s instrumental debut “Surfing with the Alien”.
His vocabulary of heavy rock tones―whinnying, howling, whistling cluster bombs of sound colored with liquid lightning picking and two-handed filigrees―was seismic. And not just for guitar freaks, because Satriani already knew that by harnessing all that weirdness within sweet melodies he could soothe the savage listener. “Surfing with the Alien” was the first instrumental album to hit the Top 40 since Jeff Beck’s 1975 masterpiece “Blow By Blow”. And the chugging, heavy-handed “Satch Boogie” and the title track both made the upper reaches of the mainstream rock radio chart, propelling the album to two Grammy nominations.

I first interviewed Satriani in 1988 right after his initial success with “Surfing With The Alien”. The stellar album had just slid off the charts and the follow up, the EP Dreaming #11, was surfing the radio waves. Satriani’s guitar hero crown was not yet secure, and he had a lot more hair! Oddly enough, he was also wearing braces. More on that later.
Satriani remarked on his unlikely initial success when we met in a San Francisco seafood restaurant to talk: “A little door opens up every 12 to 15 years when people decide they’ll listen to rock instrumentals. [Producer] John Cuniberti and I thought we were making an album for ourselves and a small group of guitar players -just this wild, cathartic, experimental experience. Anything we thought anyone else would say no to, would think would be too unorthodox, we wanted to do. We figured ‘nobody’s ever going to hear this record. Radio won’t play it. No one will know it exists.’ ”

As fate has had it, Satriani’s kept his winning streak rocking hard over the past 20 years with no signs of slowing down. But back in ’88 he had a freshman’s perspective on guitar stardom and his own six-string heroes, his strategy for building songs from the ground up, his secret life with Mick Jagger and Crowded House, laughing guitars, and his Zen-like control of pure dirty sound.

As we dug into grilled mahi-mahi, we zeroed in on Satriani’s passion for the Holy Trinity – Beck, Clapton, and Page -and chewed the fat from there. 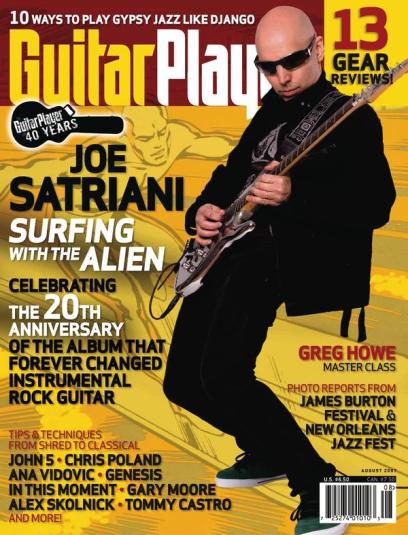 Were you influenced by Jeff Beck’s “Blow By Blow”?
– Yeah, I think so. I’ve always played instrumentals. Since my first amplifier was a tape recorder, I got hooked on the idea of recording early on. So I had all these weird instrumentals and I never got any encouragement from my peers to pursue that. To them it wasn’t a viable form of music.
When Jeff Beck came out with that record – and I had learned jammin’ to records that he and Jimmy Page and Johnny Winter and Eric Clapton were on, and of course Hendrix, my main influence – I thought, “This is great!” Every song was different. It was a nice break from the lyrical excesses of the ’70s. It sounded great. I always liked George Martin as a producer, and I think he added a great touch to the whole thing. He captured Beck in a good light. As a fan, which I was and still am of Beck, you always hope your artist gets recorded in his best environment, because you get a better record to take home.

So that record and Wired were brilliant. They introduced a style of recording and arranging that made quite an impact on me. Although I still had trouble selling the idea of instrumentals to my friends, let alone the industry. maybe it gave me confidence to look back and say, “Well, the Ventures did it, Wes Montgomery did it, and now Jeff Beck did it. Why not me? ” When I was writing and recording “Surfing with the Alien”, I would think of people like that and Dick Dale and Hendrix. They became like buddies. They made me feel not so weird when people would say, “Where are the lyrics?”

What about those braces you’re wearing?
– I’ve been wearing a splint to correct a misplaced jaw. To correct the problem they need to move my teeth around so they come together sooner and create a better jaw position.
Hopefully it’ll take care of the problem, which is called TMJ. What you get is really bad headaches, neck aches, backaches, and intense face pain with blurry vision, nausea.
This must be a challenging time for you: new braces, recording an album to follow up Alien. Are you feeling pressure?
There’s a lot of freedom in what I do. So I don’t feel like I have to play a certain kind of thing. It’s obvious that the record company would like another successful album. But you never know if a record’s going to be successful. There are so many forces in the world that can change, or let’s say dilute, an audience’s craving for something: an act of God, it could be war, it could be another artist or group of artists making the scene. So my main concern is to make a good record. Whether it’s the magic record that should be following “Surfing with the Alien” and “Dreaming #11”, I don’t think you can figure that out.

Will Stuart Hamm and Jonathan Mover, from your live band, be recording with you?
– I have Jonathan coming in to play drums, but Stu’s involvement I’m not quite sure about because I’m going to do the basics myself – guitar, bass, keyboards.

You did that on Surfing as well?
– I like doing it that way. I feel very connected to the songs in a bass sense. If I lay down a track myself and it stinks, I’ll replace it.

Where do your demos start?
– Mostly it’s bass and melody. Maybe rhythm guitar as well. Some of my songs don’t have any rhythm guitar. There’s a song on “Not of This Earth” [Satriani’s disc before “Alien”] called “Rubina.” It has three guitars playing harmonics for the whole song, and a synth bass. So when I recorded that at home, I could only record a guess at an idea that might work. Some of them are too complex to even demo at home, like “Lords of Karma.” Sometimes to get a near approximation of the sounds I want, instead of using guitar I’ll use a fuzz bass that in my mind will represent a distorted guitar and a bass doubling lines. My demos are very personal. Only I can decipher what they represent.

“Surfing” is a fun song. There are times when the guitars sound like they’re laughing.
– That was the idea. There’s a thing about guitar players that a lot of them won’t admit. We’re always caught up in the subjective thought of, “Maybe I should be displaying this aspect of my technique.” I’m gonna play whatever I wanna play, as opposed to trying to show that I’m the greatest guitar player in the world or whatever. I don’t like proving anything with any of my songs.

You tend to draw on folklore and spiritualism for a lot of your titles, like “Hill of the Skull.”
– That’s right out of the Bible. The Hill of the Skull is the site of the Crucifixion. I do a lot of reading on metaphysics and theosophy and the occult. There are a lot of great books out there that serve to make life more interesting and challenge my mind and concept of reality.

So Surfing was cut on an indie label budget. How big was it?
– We spent less than $30,000. We had some technical problems that made us have to redo things that revolved around using new technology, testing out stuff. It was gonna be a $20,000 record. In the end it turned out to be excellent sounding, so we accomplished what we set out to do.

You’re into wild sounds. Have you tried guitar synthesizers?
– I’ve picked them up a few times and they always sound like cheap keyboards. The whole thing about the guitar is that the guitar sounds good, so why try to make it another instrument? I don’t want anything to interfere with gut-to-gut guitar. That’s the instrument I like. That’s the one I can play.

So what are you playing?
– I play custom Ibanez guitars with DiMarzio pickups and D’Addario strings. For amps, it’s a pair of 100-watt Marshalls driving two 4x12s.
The amps are run clean. I’ve got a compressor in-line but I don’t really use it. I use an Ibanez digital reverb, some Ibanez digital delay, a Cry Baby, different distortion pedals, and a Boss CE-1 chorus. The rack I have is filled with a lot of back-up stuff: an extra chorus, a Randall amp/pre-amp that I can use if my pedals don’t work, a TC Electronic delay. It’s really low-tech, inexpensive, cheap, simple.

Now, you leant your backing vocal and guitar to the Crowded House single “Don’t Dream It’s Over.” But your other recent adventure in the big league rock world was as guitarist for Mick Jagger’s solo tour. What kind of boss is Mick?
– He’s a really complex musician, but a straight-ahead guy at the same time. During rehearsals in New York he would jam with us in small groups or all together. But he would often leave us alone, and you know how musicians are. Soon there would be this big jam session going on. And he would just listen while he walked around working on the stage or lighting. He’d walk up to you while you’re jamming and check out what you’re doing and smiling. Then, as we started getting into the songs, he’d remind you of something that he’d heard in the middle of a tech-rap-bebop jam and say, “You can do that if you want.”

How did you change your approach for Mick’s band?
– It was clear when I started working with Mick that I would be drawing on my earlier roots-all the rockers from the mid-to-late-’60s.
I play the blues a lot, even though you don’t hear it on my records. In fact, some of the better times we had were these guerilla dates we would do. The band would run into some little bar in Australia or New Zealand, use someone else’s equipment and do “King Bee,” “I’m a Man.” To me, that was really liberating. The band took off because there was no show -just a couple of people cramped on a tiny stage playing little amps, with Mick playing harp.
Another thing is that I couldn’t get my Ibanez guitars to produce the right sound to cut through another guitar, two keyboards, five singers, and the unbelievable rhythm section of Doug Wimbish and Simon Phillips. It was just too much sound. So I used a hybrid Strat made of Fender, Tokai, DiMarzio, and Ibanez parts, with a 1954 Fender neck.
The sound I use in my trio is not as piercing as you might think. It really has a rather broad fidelity.

You play at fairly low volume with the trio, don’t you?
– I don’t believe in piercing volume. I’d like myself and my audience to be able to hear in 2010. My soundman is under instruction to keep it on the low end.
You see, in my mind, music is a very beautiful, multi-colored thing. Then I’ve got to put it through guitars, loudspeakers, microphones. My God, by the time it comes out it makes you want to puke. You want to grab someone and explain, “This is not how I intended it to sound.”
One thing you can do with success is use money to create a more delicious sound, like Pink Floyd putting on an unbelievable sonic treat for their audience. I think I’m going to apply some of this success to create a more interesting live sound. But my music is totally different from a Pink Floyd. It will always be rather raw and there’s a lot of improvisation.

THe BRaNDoS FoRTuNeS oF WaR