Little Walter could make his harp sound like a tenor sax, he was instrumental in defining the sound that is now known as Chicago blues harp. Singer, composer, bandleader and peerless harmonica virtuoso, Little Walter was unquestionably the single finest blues artist to have been produced by the post war Chicago blues movement. This is not to imply that his musical co-workers in that blues rich city – Muddy Waters, Howling Wolf and Elmore James among others were of any lesser importance or artistry, it’s just that the great and powerful music of Muddy, Wolf and Elmore was at the core Mississippi country blues that had been brought to the city, where it gradually was modified and extended into the music that has since become known as modern Chicago blues. On the other hand, Little Walters music in virtually all its significant details was forged in the crucible of the emerging and maturing postwar Chicago Blues. He was the first great wholly modern bluesman, heir to no traditions other than those to which he, with Muddy, so greatly contributed in the early 1950’s. From the very start Walter was a modernist, and a musical innovator who had little overt respect for any tradition save that of his own making. In vain does one search his recordings for any evidence of traditional influences or for traces, however fugitive, of his sources or borrowings. They are simply not there. What is there, on the other hand is pure Walter. If there had been any appreciable influences on the development of his music, his own burning genius had long since blurred, absorbed and transformed them bye the time he had begun to record. Even his earliest known recordings, made about 1947, for a small Maxwell Street record 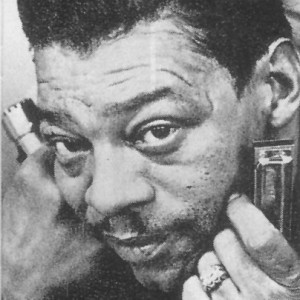 label, demonstrate his phenomenal instumental fluency and more than a hint at the powerful, distinctive vocal style he was to perfect a few years later. It was as a member of, and a vital contributor to the Muddy Waters band that Walter was given full rein to stretch his wings, and it is a tribute to Muddy’s foresight and generosity of spirit that he early recognized Walter’s great talent and allowed him every opportunity and encouragement to develop it. Muddy’s band was always a great incubator of blues talent and Walter’s is easily the brightest jewel in the crown. Muddy had begun recording for CHESS in 1947 and had enjoyed some success the following year through a brilliant series of records made with only his electric guitar and Ernest “BIG” Crawford’s percussive bass. Muddy then added second guitarist-drummer Leroy Foster, then Walter on harmonica and finally, Jimmy Rogers on guitar, Foster then switching to drums. By the time this group of musicians appeared on record in 1950, the basic approach to modern ensemble blues had been fully shapped and refined, thanks primarily to their extensive club experience. Certainly the music they record was strong and breathtakingly vital.

There is nothing tentative about the music at all. Think of the records –Louisinna Blues, Long Distance Call, Honey Bee, Howling Wolf, They Call Me Muddy Waters, Too Young To Know, “She Moves Me, “Still A Fool-, among others, and all of them deserved classics of the post-war blues. None is less than remarkable and many are magnificent. Foremost among their many virtues is the stunning level of the interplay among the musicians, and the great feeling of spontaneity, the wonderful “aliveness” of these records, that makes them so gripping. And one of he chief contributors to this is Walter, whose darting, probing, swooping, fluent, ever appropriate harmonica lines provide the perfect foil to Muddy’s impassioned vocal and guitar efforts, the harp underscoring, answering, extending, countering, echoing but always enhancing them and in so doing imparting a wonderful sense of motion and energy to the music. It was the fluent, responsive character of Walter’s playing, no less than the distinctive sound color of his amplified harp, which helped to make Muddy’s records of the early 1950’s the magnificent achievements they were and still are for that matter. It was inevitable of course that Walter would leave Waters fold and strike out on his own and he took the step in 1952. Walter was backed by guitarists David and Louis Myers and drummer Fred Below (known as the Aces, this group had been working with Junior Wells), he made his first records for the CHESS subsidiary CHECKER records. CHECKER 758, coupling the magnificent instrumental Juke and the compelling vocal blues Can’t Hold Out Much Longer, was an immediate hit in the rhythm and blues market and establised Walter as an important recording and performing artist in his own right. This record not only signalled the arrival of a major, widely popular blues artist and illustrated the twin facets of Walter’s talent, vocal and instrumental, but it offered further evidence of a thoroughly original blues conception. There was nothing casual or left to chance about either of the performances. Even “Juke”, which bears strong evidence of a planned spontaneity in execution, which is arranged in the sense that it provides for contrast through the use of “breaks” in the fifth chorus. Then, Walter’s constant approach to the songs first two choruses is much to deliberate and controlled to be the result of mere chance. The fact he follows this format in the final chorus well confirms this impression.Even more remarkable is the vocal blues Can’t Hold Out Much Longer. This is a masterfully constructed piece of music in that it makes highly interesting and original use of the standard 12 bar blues form. It follows an ABB scheme, the second and third lines of each verse being used as a refrain, and the first line consisting of four short phrases of text in which the song’s “story line” is advanced. This makes for fairly dense text constuction and necessitates a quicker vocal delivery than is usual in the more common AAB 12 bar blues form. Actually this song is a slow blues, but thanks to Walters ingenious construction, appears to be rather brisk tempoed. Walter apparently found this an interesting way of structuring songs for he employed it, occasionally with slight variations, on a number of his recordings, including Your So Fine, You Better Watch Yourself, Tell Me Mama and Boom Boom (Out Go The Lights). He also used it as the normal stop time “break” chorus on songs such as “Blues With A Feeling”.To a man ever musician who worked with Walter feels the experience to have added significantly to his musical knowledge, “Walter was simply a person you could always learn something from, just by being around him,” recalled drummer Fred Below, a charter member of the Jukes who was associated with Walter for a number of years. “He was always calling rehearsals for us to go over new tunes or to tighten up on are old ones. And the funny thing was, nobody ever complained about the time spent rehearsing. We were learning, see? It was like Walter was running a school where you could really learn something you were interested in. The beautiful thing was you check out what you learned each day by playing in the club that night. And another funny thing it seemed like Walter was always right.” 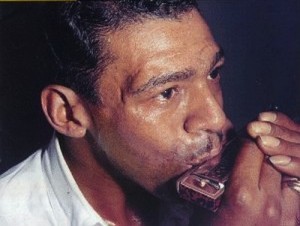 Fred Below is not alone in considering his time spent with Walter to have been among the high points of his professional experience. Virtually every man who worked as a member of Walters band speaks with awe filled affecion of his relationship with him. In the period 1952 through 1968, when he died as the result of head injuries sustained in a fight, Walter recorded in all about 100 titles for CHESS, of which slightly more than half were issued on record, invariably as singles. Walter is widely regarded as the blues’ greatest harmonica soloist, and there is no dening his prodigious virtuosity on this humble instrument. In his hands it became a strongly expressive blues voice of astonishing breadth and fluency, capable of ranging from the subtlest of nuances to the most powerful full-throated shouts and everything in between. Amplifying the instrument by means of a small microphone held in his cupped hands, Walter’s harmonica took on a swooping saxophone-like sound that was perfectly wedded to the distinctive, imaginative, highly exiting character of his improvisations, derived as they were from listening to jazz saxophonists and probably bop musicians.

From his very first to his very last record, Little Walter was unique amog post war blues artists. From the outset he was a true original, a visionary musician whose natural mode of expression was the modern electrically amplified emsemble blues, to the development of which he had contributed so significantly. In the legacy of his recordings he has enriched even further those traditions with some of the finest, most perfectly achieved distillations of the art of modern blues ever recorded.Through his transcendent innovative genius Little Walter, singer, composer, bandleader and peerless harmonica virtuoso, helped to redefine and reanimate the blues and in doing so earned a secure place among the very greatest contributors to popular art America has given the world