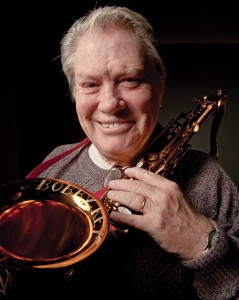 Keys’ solo lasts about only 25 seconds on this strung-out ‘Exile’ gem, but it brings a red-light-district patina to a song that can’t resist rolling around in the dirt.
The casual sax is the perfect mirror to Keef’s bluesy guitar. Forget proficiency; this is all about feel.

Keith Richards wrote this eye-rolling album-closer about his frustrations with Mick Jagger and, as such, features only Charlie Watts on drums, Ron Wood on backing vocals and Keys on saxophone.
After being exiled from the Stones, Keys returned for a few turns on ‘Emotional Rescue.’ His wafting sax dovetails perfectly with Richards’ weary vocals.

Who needs the Memphis horns when you have Keys on sax and Jim Price on trumpet?
The pair brings greasy, Stax-syle soul to ‘Sticky Fingers’ with their brass parts – first adding support to this sauntering track, and later carrying ‘I Got the Blues’ to its mournful finale.

Keys, Keith Richards and producer Jimmy Miller bashed out this ‘Exile’ chestnut in about four hours, with Keys playing maracas then overdubbing bits of baritone sax.
Keys’ blurting baritone sax might not be something you notice the first time you listen to “Happy”. But as you begin to dig into the song’s elements, you realize that Keys floods the bottom of the song with that grimy sound.
It’s the soundtrack to those decadent days in the south of France.

Keys made his Stones debut on this ‘Let It Bleed’ track, matching Mick Jagger’s rude lyrics with his sneering tenor sax. Keys gets to bleed all over “Live With Me” for the better part of a minute with a wailing solo.
The loose, fluid and free-roving saxophone is the counter-balance to the song’s lockstep rhythm. Put together, it’s a great groove.

Keys gets to have his way with his saxophone here, initially floating jazzy textures through the track’s sparse funk, and eventually going toe-to-toe with Keef in a call-and-response solo during the last minute.
The Stones finally got around to playing “Emotional Rescue” onstage in 2013, including a spotlight solo for Keys.

The Stones let it rock on this rollicking stunner from ‘Exile on Main St.,’ complete with not one but two screaming sax solos by Keys. He plays both tenor and baritone saxes on the rip-roaring tune, adding roadhouse swagger to a rockabilly journey through the U.S. south. The Stones were merely interpreting American music; Keys, on the other hand, was just playing how a guy from Texas should.

This rustic country shuffle gets a double shot of rhythm and blues from Keys’ howling saxophone. He takes a gritty solo about halfway through (the sax is so hoarse, it sounds like it’s infected … it was laid down at Nellcote, after all) and then continues to squeeze the life out of his blurting horn for the duration of the tune. Down and dirty.

You can’t have the Top 10 Bobby Keys Rolling Stones songs without a taste of “Brown Sugar”.
According to Keys, his 30-second solo on the tenor sax was laid down in one take – stunning, given how the solo is burned into most rock fans’ brains; yet it’s appropriate, given its raw immediacy. It’s been said that Keys approaches saxophone solos like a guitarist, and ‘Brown Sugar’’s solo bears that out. It’s punchy, rude and dynamic. While Mick Jagger sings about a dirty deed, Keys actually gets down to business.

Mick Jagger and Keith Richards may take credit for this ‘Sticky Fingers’ epic, but we all know it belongs to Mick Taylor and Bobby Keys, who contributed mesmerizing solos during the song’s extended jam. And, according to Keys, it was all improvised on the spot; “Can’t You Hear Me Knocking” wasn’t even supposed to have a sax part. But Keys grabbed his horn, and there he is at the three-minute mark, fluttering in between Rocky Dijon’s congas, conjuring thoughts of a smoky blues club and spitting fireballs during his 90-second solo. A team player to the end, Keys recedes to punctuate Taylor’s majestic turn, only to resurface to get in a few good grimy blurts.